Many human rights advocates argue that the United States would not only strengthen international standards by cooperating but would be better off for such cooperation. This argument is not likely to convince the American people, who will find it hard to understand why the United States, the world's oldest democracy, cannot be trusted to make decisions for itself without the oversight of countries that—in living memory—were responsible for mass murder and now claim to be special champions of human rights.

Meanwhile, nations friendly to the United States will be subject to the political whims of international opinion. Israel, in particular, will be vulnerable to international prosecutions seeking to make good on European criticism that Israel is overreacting to Palestinian violence. The United States can exercise a veto against one-sided condemnations in the Security Council. So, if international legal standards are pressed forward, they are likely to trigger sustained American opposition. Will that be good for the cause of international human rights? It is far from the only problem, however.

Governments that seek to reassure their own people—or the international community—about their commitment to liberalization have often sought to register their good intentions by ratifying international rights treaties. Expressing good intentions, however, is something different from submitting to international authority. The UN has been able to secure at least rhetorical commitment to human rights norms from some of the world's most repressive regimes—at the price of avoiding any threat of serious enforcement.

Whether or not that is a sound bargain, it is certainly frustrating to human rights advocacy groups. So now we are moving to more aggressive measures. The ICC is remarkably aggressive in removing fundamental decisions from national to international hands. Take the case of pardons and amnesties. Every country that has made a transition to democracy has extended some form of amnesty to officials of the old government.

With few exceptions, in fact, amnesties have been quite comprehensive and sweeping. Is that wrong? Plainly, advocates of the Pinochet prosecution thought the democratic government in Chile was wrong to uphold the amnesty of Pinochet.


The inability to offer amnesty to a previous regime will create serious problems for a developing country trying to recover from a new round of rebellion and repression or repression followed by successful rebellion. The United States granted general amnesty to Confederate rebels after the Civil War—even to those threatened with capital punishment during the war for massacring black troops. In the s, Spain and Portugal made their transitions from decades of fascist repression without prosecuting those responsible for past abuses, as France and other countries that collaborated with the Nazis had earlier turned a blind eye to most atrocities committed by their own governments during World War II.

Why should less developed countries be held to a higher standard? A reasonable concern is that an outside prosecution will look like the imposition of an outside power; in other words, a return to Western imperialism. This is a serious concern because human rights enforcement is increasingly taking on the character of a new form of imperial rule. Part of the problem is that the energy for international human rights enforcement is provided not by governments but rather by nongovernmental organizations, and the priorities of NGOs tend to be the priorities of Western activists.

Chile's Pinochet was not the bloodiest of dictators, but he received special attention from a Spanish magistrate because the Chilean military government allowed leftist opponents to leave Chile and organize opposition networks in other countries—where they worked to organize exactly the sort of prosecution that was finally launched in Spain.

A larger and more enduring source of energy comes from feminist organizations. They were highly active in UN conferences on population in and on women's rights in and provoked much controversy by pressing for international recognition of abortion rights and sexual autonomy rights especially for homosexual activity. Western countries, urged on by feminist advocacy groups, tended to support these aims.

Most developing countries, especially Islamic countries, rejected them. Yet United Nations human rights committees continue to pursue the feminist agenda. The monitoring committee for the Convention on the Elimination of Discrimination Against Women CEDAW , for example, chided Belarus for instituting a national mother's day which the committee saw as leading to dangerous sex stereotyping , told the government of Libya to reinterpret the Koran so that its requirements would be "permissible under CEDAW," told the Kyrgyz Republic that it must legalize lesbianism, told China that it must legalize prostitution, and so on.

Would such sanctions not be more likely to convert the WTO into a target of nationalist resentments? Meanwhile, if globalized trade does help to nurture new constituencies for human rights, is it sensible to make global trade hostage to the demands of advocacy groups? In the end, the American problem and the problem with less developed countries are simply the most obvious illustrations of a general problem.

The idea of a world law of human rights implies there is a structure of international authority—a world state of some sort—to enforce this law. Of course, there is nothing of the sort.

Even a domestic court, it is true, depends on executive authorities to enforce its rulings on the ground. In countries where there is some respect for law, executive officials do feel obligated to uphold court rulings. After all, courts are part of the same government and the reputation of the government as a whole is at stake when its courts are defied. When it comes to international courts, however, no national government has quite the same stake in upholding the court's authority.

NATO forces in the Balkans have been notoriously sluggish about apprehending war criminals sought by the special tribunal in The Hague. If the ICC comes into existence and proceeds to issue arrest warrants, how many governments will stir themselves to catch their own nationals or even nationals of states with which they want to stay on good terms? Ineffectual human rights programs are nothing new in the world. The problem may be more serious when enforcement does "work. What if a prosecution then goes forward against the wishes of the home state?

Even in a domestic setting, there are times when executive authorities feel they cannot leave matters to criminal courts. Almost every country vests a pardoning authority in the executive to deal with cases where prosecution might stir dangerous protest or be viewed by most citizens as unjust.

In extreme circumstances, executive authorities may direct police or military forces to disregard contrary court rulings as President Lincoln did, during the Civil War. Such measures have the potential to throw a country into turmoil or into lawless military dictatorship. How much injustice or illegality will a people tolerate to save their country in an hour of emergency or to heal the wounds of former strife? Perhaps it is too facile to suggest such problems can all be settled by plebiscite—though that is, in fact, what happened in a number of Latin American countries in the s, where amnesties for brutal military suppression of left-wing terrorism were approved by popular referenda.

The fact remains that people who inhabit the same country must somehow learn to live together. In new democracies, people have sometimes shown heroic patience and forbearance in accepting former oppressors or violent foes back into their society, as in South Africa and the Baltic states. With all the imperfections of democracy, shouldn't this matter be left to local determination? What happens, after all, if an outside intervention triggers a new round of civil strife and rebellion?

No international court commands its own army. 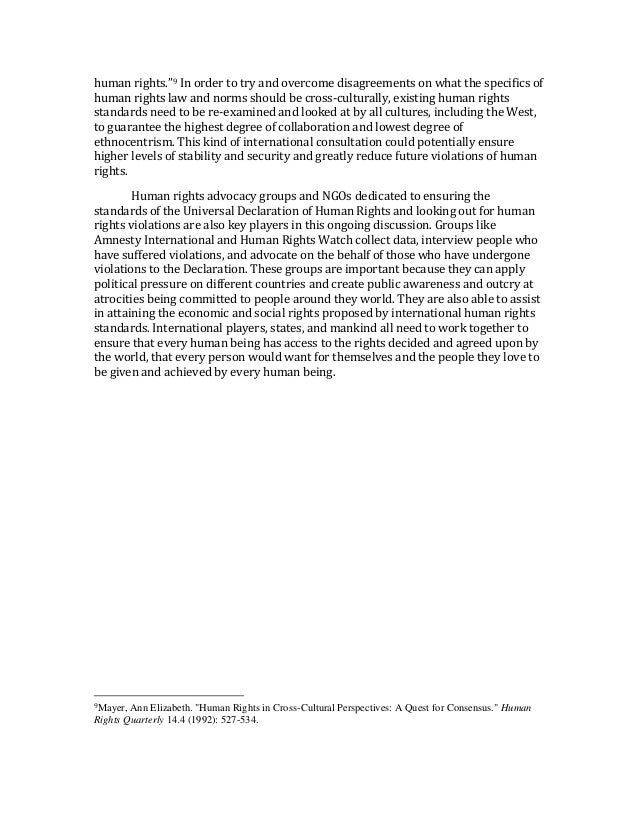 Third party states that undertake a trial do not commit themselves to fixing the consequences. They seek to render judgment from a distance—without any responsibility for the consequences. When street crime begins to rise or financial swindles proliferate, citizens in a democracy may demand that police and prosecutors step up their responses.


Most of the time, though, governments set enforcement priorities without much notice, because the assumption is that the law applies to all and will be generally enforced. No one thinks such standards could be enforced against China or Russia as readily as they might be against Chile or Estonia. No one thinks the scale of human rights abuses is the same in Western Europe as in sub-Saharan Africa.

How, then, does the world set enforcement priorities for human rights? There is no world democracy that can register citizen protest—and then balance that with contending views and competing concerns.

The Violation Of Human Rights

At best, we have a chorus of self-selected NGOs, whose priorities may be much influenced by their own ideological fixations or fund-raising opportunities. So we will have some interventions driven by the agitation of NGOs and then a vast amount of inattention. The idea that an international law of human rights is operating in the background can be a highly effective soporific.

As the historian Samuel Moyn has argued in his book The Last Utopia, it was not until the late s that human rights became a major force in international relations. Allies such as Iran and Saudi Arabia were just too important for American security, and seen as a crucial counterweight to Soviet influence. Still, something changed with Carter.

Mental health, mental illness, and human rights in India and elsewhere: What are we aiming for?

It is not that presidents have become more idealistic. Rather, it is that they have increasingly used the language of rights to express their idealistic goals or to conceal their strategic goals. Despite the horrifying genocide in Rwanda in , and the civil war in Yugoslavia, the s were the high-water mark for the idea of human rights. With the collapse of the Soviet Union, economic and social rights lost their stigmatising association with communism and entered the constitutional law of many western countries, with the result that all major issues of public policy came to be seen as shaped by human rights.

Human rights played an increasingly important role in the European Union and members insisted that countries hoping to join the EU to obtain economic benefits should be required to respect human rights as well. NGOs devoted to advancing human rights also grew during this period, and many countries that emerged from under the Soviet yoke adopted western constitutional systems. Even Russia itself made halting movements in that direction.